Another week or so, another post on what I've been up to.

Acorn 4.3 is out
We pushed out Acorn 4.3 yesterday for direct customers, and then 4.3.1 a few hours after that. (App Store versions will be coming soon).

Acorn 4.3 has a bunch of bug fixes, and new RAW import features (along with speed improvements). The release notes are available as usual.

Why so quick release of 4.3.1? I belatedly noticed a regression when fixing a brush bug. If you used a tablet and had pressure sensitivity turned off, the first dab of your brush stroke would be clipped incorrectly. This made for a funky looking brush stroke.

It was a super easy low risk fix, so I pushed it out quickly.

Work on Acorn 4.4 continues, and I'll begin pushing up betas of that soon enough. I managed to squash some memory leaks when driving Acorn with Cocoa Script, as well as some misc bug fixes (Project Oak now stands at 42% done). No new big features yet.

I also played around with Cocoa Script "shaders" for shape graphics in Acorn. This won't ship in 4.4 (or maybe ever?), but it was fun to code up and might be something awesome some day. How it works is a little hard to explain, but I'll try. Basically, instead of a rectangle having just a stroke and a fill when it draws, it will call a snippet of Cocoa Script code in place of the normal drawing routines. That snippet of code then has access to a bunch of libraries, and can do whatever it wants in the context it is drawing into. The following example draws a rectangle with a gradient, draws a border around it, and also draws a lighter border on the inside of the shape. 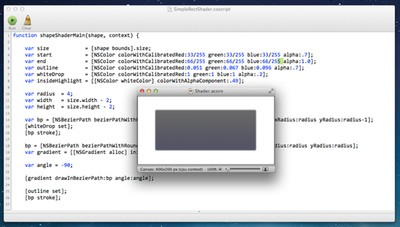 Normally you'd need at least two different shapes in Acorn to draw something like this. This is future stuff certainly, and probably doesn't even make sense in Acorn. But the programmer in me thinks it is kind of neat.

FMDB Stuff
Guilherme Mogames wrote a tutorial for using FMDB with SQLCipher. This comes up every once in a while on the FMDB mailing list, so it's nice to see someone publish this.

Other Stuff
I've been playing with Nanoblocks recently. They are essentially teeny tiny legos- so small in fact that it's sometimes wise to use needle nose pliers to work with them. It's a nice relaxing change from coding all day. It's also nice to see Ohio Art is still around.

My new Mac Pro finally arrived as! What a game changer this is— everything is buttery smooth and fast, and being able to run OS X in VMware without any annoying lags is worth it alone. It makes testing Acorn on clean builds of 10.8 and 10.9 pain free. I love it, and recommend that everyone get their own. Maybe if it becomes mass market, that'll drive the price down?

Anyway, till next time.