Zero to Pizza in 80 Seconds

In general when cooking a pizza, the hotter the oven, the better. This is why most folks who are really into pizza make an outdoor wood burning oven. This has been on my todo list forever, but I think I might just have to cross out that task now.

At our house we've got an electric oven, which is generally considered to be inferior to gas ovens. However, yesterday I discovered one great advantage. I had a bright idea to cook a pizza in my electric oven with the broiler, which rests on the top underside of the oven. My general theory was as follows:

I had instant success. Maybe a bit too much success- the bottom was a bit charred, and I actually got the pizza stone so hot that there was a little fire on it right before I put the pizza in. Whoops.

But the top of the crust was great, and the toppings and cheese were cooked exactly how I like them. I was giddy. And once my wife was safely out of the house for derby practice, I decided to attempt pizza #2. Only this time I would clean the pizza stone first, and I would document the baking.

So here it is, a pizza being made in an average every day kitchen, in about 80 seconds:


(I know YouTube is awful, but everyone can view it. Besides, you're using Click To Flash, right?)

80 seconds to bake that pie. Wowsers. You'll also notice that I got a bunch of bubbles when cooking it. Had I not been holding a camera, I would have tried to pop them with a long poker or something. The scream at the end was me going "Oh shit, I need both hands right now and I'm holding a fancy camera what do I do?!?!?!". I thought it was quite dramatic though, and should be left in. (Neven's "Fry Pan of The Gods" also makes a guest appearance if you look close enough).

It turned out great. If anything, I should have let the pizza stone get a little bit hotter on the second try. The bottom was cooked all the way through, but I like it a bit more on the crispy side (but not as crispy / charred as attempt #1).

Here are some pics of the final product: 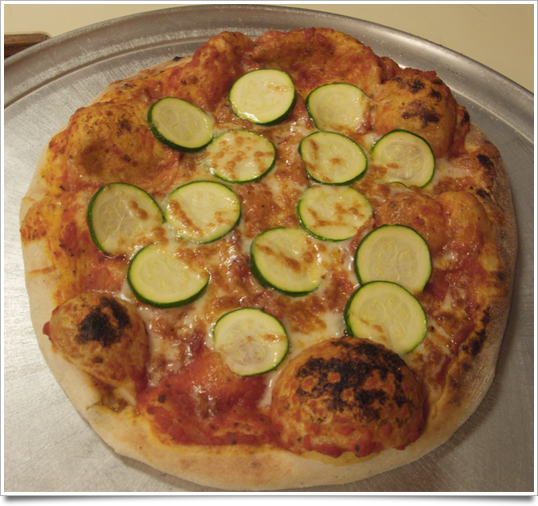 The topping is some sort of squash, and I always use a high quality provolone for the cheese. I think the secret is to not overdo the toppings. If you're looking for some good flour, might I suggest King Arthur's Perfect Pizza Blend? 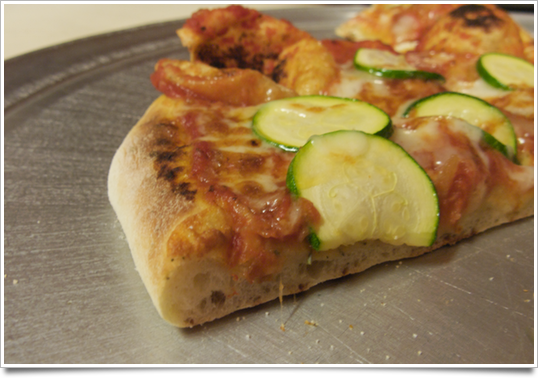 Look at that crust. Just look at it. So wonderful. I have to end this post now as I'm beginning to get a little weepy from joy.