Brent Simmons mentioned this earlier today, but I'm going to pimp it as well since I'll be there.

Seattle is having an iPhone conference coming up- Voices That Matter, iPhone Dev Edition. I've never been to one of these before, but I've heard good things about it. There are going to be a bunch of great speakers including some friends of mine, Kevin Avila and Wolf Rentzsch, as well as some long time Cocoa guys, Aaron Hillegass and Erik Buck. I'm looking forward to Aaron's talk. I've seen him give presentations a bunch of times, and it's always good.

Learn how to build, test, and distribute your awesome iPhone (+iPad) apps. Learn how to code for Apple's mobile stuff, meet folks and then go grab some drinks.

Aaaaand if you register before March 12th, and use the coupon code 'PHBLOGS' you'll save a total of $300. Use that saved money to buy a 32GB iPod Touch. 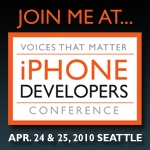